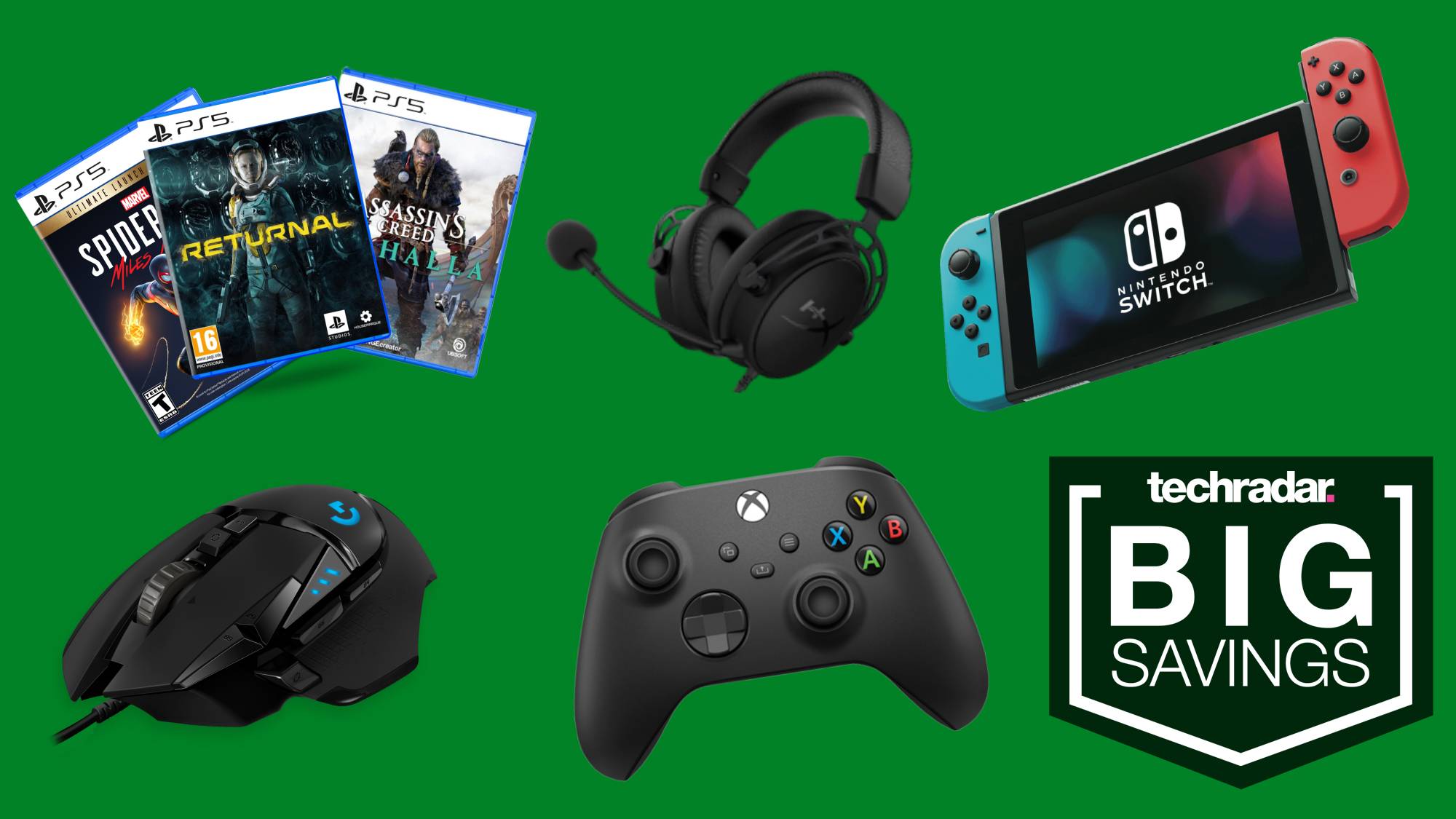 Prime Day may officially be over but we're still seeing some excellent gaming deals lingering in both the UK and US. From mice, keyboards, and headsets all the way through to Nintendo Switch bundles and the latest PS5 games and accessories, there's something for everyone in these Prime Day gaming deals.

We've combed through the web and rounded up the best Prime Day gaming deals that are still available for you below - we've even highlighted some standout offers. But you better act fast, as we're not expecting these deals to last much longer.

Just some of the key discounts on offer are 15% off a Nintendo Switch + Ring Fit Adventure bundle in the UK and $10 off the newly released Returnal in the US. Want to save on your next gaming experience? Read on for the best Prime gaming deals around.

(Not in the US or UK? Scroll down for deals in your region.)

Xbox Series S: Â£249.99 at Amazon
Want an Xbox Series S? Amazon is showing stock for Microsoft's more affordable console again. This is a great opportunity to snag the new Xbox if you've been hoping to secure one, and Prime members can get next-day delivery.Â

Xbox Series S + Electric Volt Controller: Â£294.99 at Amazon
You can own the beautiful Electric Volt controller with this great Xbox Series S bundle. While it's not a massive discount, we'll take a saving of Â£9.99 any day of the week.

Swing over to this deal right now

Returnal: $59 at Amazon
A genuine PS5 exclusive, Returnal takes full advantage of the PS5's super-fast SSD, 3D audio and DualSense controller to deliver a truly next-gen experience. Save 29% on this critically acclaimed roguelike right now. It's not the best offering we've seen, as it was previously discounted to $49.99 earlier this week, but still worth checking out

Outriders Day One Edition: $44.99 at Amazon
Outriders is a chaotic looter shooter that excels at making you feel like a superpowered God, and it's now 25% off at Amazon. The Day One Edition includes the "Hell's Rangers Content Pack" so you're getting a bit of extra content for your money.

Watch Dogs: Legion: $19.88 at Amazon
IN STOCK SOON - Ubisoft's wonderful recreation of London (if hackers took over) is now down to the super low price of $19.88, which is saving of 67%. Watch Dogs: Legion is also getting a 60fps patch, so it will run smoother than ever on your PS5.Â

Godfall: $39.70 at Amazon
Godfall isn't the best game on PS5, admittedly, but at this price it's well worth a go. The game has received a substantial amount of post-launch content, so you'll at least be getting a far better experience than what was available at launch. And with a saving of 64%, you can't argue with the price.Â

The Legend of Zelda: Link's Awakening: $39.88 at Walmart
A perfect re-imagining of an all-time classic, The Legend of Zelda: Link's Awakening lets you go right back to revisit the world of Koholint Island. Of course, it looks a little different from when you last went there on your GameBoy with all-new graphics, musical arrangements, and puzzles. This is the cheapest price we've seen so far on this 2019 release, so definitely don't sleep on it.Â

Luigi's Mansion 3: $39.88 at Walmart
Here's the lowest price yet on a wildly popular Nintendo Switch classic - Luigi's Mansion 3. Let Mario's often-overlooked brother take the limelight for once in this light-hearted haunted house romp. This one's particularly great if you're looking for a great cooperative campaign to play with friends.

Super Mario Odyssey: $39.88 at Walmart
We're no stranger to sales on Super Mario Odyssey - it is, after all, the classic Mario platformer from the Switch's early days. That said, this is one game that deserves a place in any Switch owners library, and this is a return to the lowest price yet for one of our favorite adventure titles on the Switch.

Fire Emblem: Three Houses: $39.88 at Walmart
If you're a fan of JRPG's, you won't want to miss Walmart's lowest price yet on Fire Emblem: Three Houses. With gorgeous cell-shaded graphics and a compelling storyline that gives off serious Harry Potter vibes, this is a good one to get if you'd like to get away from the usual Nintendo classics - such as those featured above.

SanDisk 128GB microSDXC card for Nintendo Switch: $23.45 at Amazon
Save 33% - This memory card has been stuck at $27 for a few months now, but this Prime Day deal drops it slightly further down to $23.45. That's excellent news if you're after a Nintendo official microSDXC card to expand your console's storage.

Armor 4TB External Drive: $ $138.92 at Amazon
Save 18% - A perfect companion to your PS5, you can easily manage your games and have them playable within moments. Because of its rugged design, its rain and dust resistant if you're planning on taking it outside, alongside it being shock resistant if it gets dropped. We did see this drive drop to $104.49 earlier this week, but a $30 saving is not to be sniffed at.

Ring Fit Adventure: $69.88 at Amazon
Save $10 - This offer on the at-home workout game Ring Fit Adventure has been available for a few months now, after stock shortages last year drove the price right up. Nintendo doesn't like to discount its more premium experiences too often, which means we may not see further price cuts this month.

Logitech G502 Lightspeed Wireless Gaming Mouse: $94.99 on Amazon
Save $55 - The Logitech G502 Lightspeed typically tops lists as one of the best gaming mice in the world, making this a great choice for gamers who donâ€™t want to compromise on anything. With $50 off, you're getting customizable weights, an intuitive scroll wheel and responsive clicks for an absolute steal.

HyperX Alloy Elite 2 Mechanical Gaming Keyboard: $116.66 on Amazon
Save 10% - The HyperX Alloy Elite 2 Mechanical Gaming Keyboard is one of the best-looking gaming accessories on the market, featuring pudding keycaps for brighter RGB lighting and sturdy media controls. We did see this keyboard discounted to $99.99 earlier this week but a $13 is still not to be sniffed at.

Razer Kraken X Gaming Headset: $39.99 at Amazon
Save $10 - This USB headset is a fantastic entry-level product from one of the world's best peripheral brands. Experience 7.1 surround sound for accurate positional audio across any game environment, and at just 0.55 lbs, this lightweight headset is perfect for lengthy gaming sessions.

Razer Kraken Kitty Gaming Headset: $129.99 on Amazon
The Kraken Kitty edition gaming headset from Razer is now famous for being a must-have accessory for gamers and streamers alike. With customizable RGB lighting and built-in cat ears, you'll look incredible regardless of what you're playing.

Logitech G935 Wireless Gaming Headset: $118.99 on Amazon
Save $50 - With a huge 15 meter range and a 12-hour battery life, the Logitech G935 Wireless Gaming Headset can accompany you everywhere in your home. You're also getting a fully retractable mic and the option to use a 3.5-meter long cable across PC, console and mobile. This headset was reduced to $99.99 earlier this week.

Razer Kishi mobile gaming controller for Xbox Android: $69.99 on Amazon
Save nearly $15 on the Razer Kishi gaming controller for Android phones with this Amazon Prime Day deal. The Kishi separates to fit around many Android smartphones (a la the Nintendo Switch), or snaps together to use as a standalone controller. It connects directly to the phone via USB-C port, so it has less latency than a Bluetooth controller. This Xbox version is also Xbox Cloud Gaming-compatible.

One of the best racing wheels on the market

Logitech G923 Racing Wheel and Pedals: $299.99 at Amazon
Save $100 - One of the best racing wheels around is discounted for Prime Day, saving you $100. The Logitech G923 is compatible with Xbox Series X/S, Xbox One and PC and boasts TRUEFORCE force feedback, responsive pedals, dual-clutch launch control, and a genuine leather wheel cover.

Seagate Game Drive 2TB External Hard Drive Portable HDD, Designed for Xbox One, Green: $72.99 at Amazon
Save 20% - Running out of drive space on your Xbox consoles? Use this portable external hard drive to store an extra 50 titles. Includes quick step-by-step setup and plug and play USB 3.0 connectivity with no power cable needed. It features the classic green design from the original Xbox logo for added coolness.Â

Samsung T7 Portable 1TB SSD: Â£139.21 at Amazon
Save 15% - While not as big a saving as the 500GB or 2TB models, this is still a nice discount on the 1TB SSD version of Samsung's popular external drive, and is the perfect size if you want to make more room for your games.

Razer Cynosa Lite Gaming Keyboard: Â£20.99 on Amazon Save Â£24 - Who says gaming accessories need to be expensive? With soft (yet reactive) keys, the Razer Cynosa Lite is now better than half price in the Amazon Prime Day sale, making this the perfect choice for entry-level gamers wanting to smash some keys on their favorite PC titles.

No matter where you live, you'll find all the lowest prices for games, consoles and accessories from around the web right here, with offers available in your region.