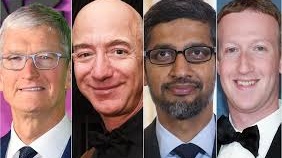 The hugely ballyhooed antitrust hearing where the chief executives of America’s largest tech firms testified in front of US lawmakers was a typical affair of thrust and parry. It was also, as the cliche goes, immovable object against unstoppable force.

The lawmakers, investigating competition in digital marketplaces, were aggressive and relentless. The four marque names from the industry, Sundar Pichai, Mark Zuckerberg, Tim Cook, Jeff Bezoz were, for their part, unyielding and steadfast.

Whatever may be the eventual outcome of the hearing, it was good theatre.

Among the four, Pichai and Zuckerberg seemed to face more questions. Both of them seemed well prepared. Especially the Google Alphabet CEO. He was pretty comfortable in articulating his company's case.  Cook was posed the least amount of questions. Bezos was put under enormous pressure over his company's business tactics.

All eyes on Bezos

Here are some of the key takeaways for us from the meeting that lasted close to six hours.

As the world's richest person was making his first appearance before the Congress, his testimony held more attraction than others.

Bezos was put under the cosh particularly on Amazon's approach to pricing, acquisitions and how it uses data from third-party sellers.

Many times the aggressive nature of the questions seemed to put him on the backfoot, and he deadbatted them by saying he couldn't answer the question or couldn't recall the incident.

In response to repeated questions on use of nonpublic third-party seller data, Bezos said that Amazon had a policy prohibiting such practices. "But I can’t guarantee you that that policy has never been violated,” he added.

Zuckerberg found himself in the hot seat when he was confronted with the internal company emails he sent in 2012 about buying Instagram.

The lawmakers, using the emails, made a case that Facebook viewed Instagram as a threat and, rather than compete with it, the company bought it out completely.

Zuckerberg adroitly handled the situation, without exactly denying the charge, but by pointing out that the whole deal was cleared by the Federal Trade Commission.

Cook has a relatively easy time

Of the four, Cook received the fewest questions, most of which were centered on Apple's App Store policies. As one analyst pointed out Cook seemed to have an easy time as there was hardly anything probing about Apple's App Store guidelines for developers, which have been a main complaint among critics.

Cook used the occasion to play the America card. "Apple is a uniquely American company whose success is only possible in this country," Cook said as he reeled out the number of US jobs it has helped create.

Pichai faced as much scrutiny as did Zuckerberg, but the former looked unscathed and came across as being well prepared for any kind of grilling.

Pichai was questioned over Google’s content policies and potential ties to the Chinese government. Pichai was particularly nagged by the Republicans who felt that Google held a bias against coservatives. The Google chief, who seemed relaxed and at ease, said: There's nothing in the algorithm that has anything to do with political ideology. We do get complaints across the aisle."

One of the interesting things that emerged during the questioning through videoconferencing was that these tech majors were not beyond the techno bloopers that afflict the rest of us commoners, as it were.

At one point, Bezos spoke without unmuting himself. There were some glictches in his video quite early in the meeting. Zuckeberg's voice and video did not match at one point.

As we said, it was all pure theatre.