Just what the doctor ordered: Reliance acquires Netmeds, as battle with Amazon gets intense 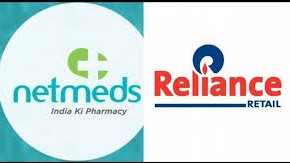 Just as was widely expected, Reliance Industries Limited (RIL), through its subsidiary Reliance Retail Ventures Limited (RRVL) has acquired a majority equity stake in Vitalic Health and its subsidiaries (collectively known as ‘Netmeds’) for a deal worth Rs 620 crore.

Incorporated in 2015, Vitalic and its subsidiaries are in the business of pharma distribution, sales, and business support services. Its subsidiary also runs the online pharmacy platform Netmeds, which in a sense provides the basis for the whole deal.

Speaking on this strategic investment, Isha Ambani, Director, RRVL, in a press statement, said, “the addition of Netmeds enhances Reliance Retail’s ability to provide good quality and affordable health care products and services, and also broadens its digital commerce proposition to include most daily essential needs of consumers. We are impressed by Netmeds’ journey to build a nationwide digital franchise in such a short time and are confident of accelerating it with our investment and partnership.”

Pradeep Dadha, Founder & CEO, Netmeds, said, “It is indeed a proud moment for 'Netmeds' to join Reliance family and work together to make quality healthcare affordable and accessible to every Indian. With the combined strength of the group’s digital, retail and tech platforms, we will strive to create more value for everyone in the ecosystem, while providing a superior Omni Channel experience to consumers.”

Netmeds, is a fully licensed e-pharma portal that offers authenticated prescription and Over the Counter (OTC) medicine along with other health products. Netmeds offers fast delivery of prescription medications to over 20,000 pin codes. Netmeds has served over 5.7 million customers in more than 670 cities and towns.

Consumers get access to more than 70,000 prescription drugs and thousands of non-prescription goods for wellness, health, and personal care.

Netmeds is promoted by Dadha Pharma, a Chennai-based company pharma company that was started in 1914, and got into drug manufacturing in 1972.

The fact that it is an Indian company allows it to maintain inventory as per Indian government rules for e-commerce. This is something that works against Amazon India.

Reliance Retail has an existing tie-up with Netmeds --- in May they joined hands together to deliver groceries also from its online retail store JioMart.

It's all happening on the e-pharmacy front

What is most interesting is Reliance acquiring Netmeds comes less than a week after Amazon itself started selling medicines online. It has rolled out the Amazon Pharmacy service in Bengaluru allowing customers to order medical supplies and prescription drugs, among others.

The entry of the heavyweight RIL shows how lucrative the online pharma business is now. It is a happening time for the segment as online ordering and delivery of medicines has increased following the Covid-19 outbreak as customers stay at home and follow social distancing norms. According to one research, this market segment is expected to touch $3.7 billion by 2022.

Apart from Reliance and Amazon, another e-commerce biggie, the Walmart-owned Flipkart is also planning to jump into this pharma bandwagon.