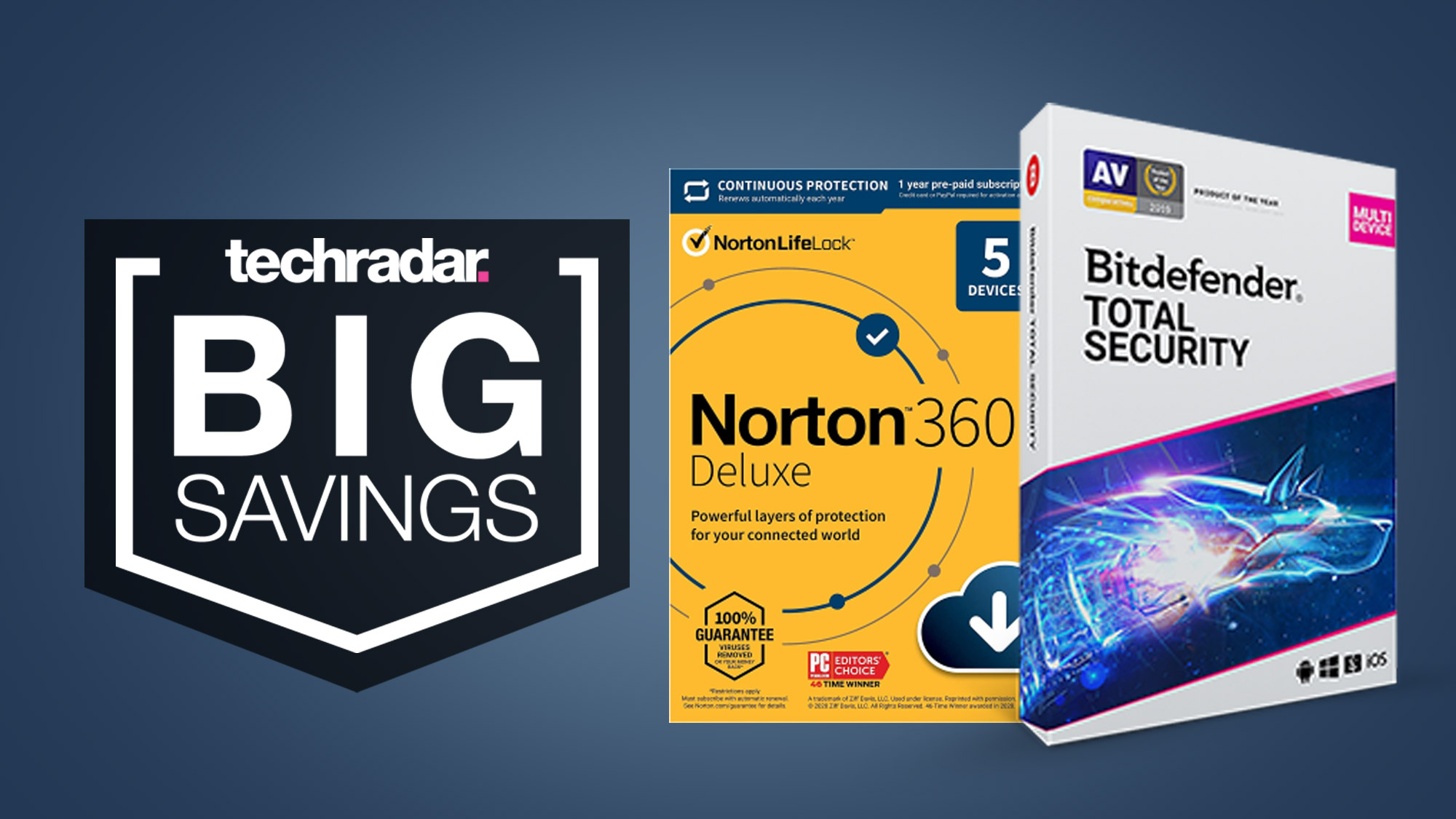 Think of Cyber Monday and it's easy to let your mind drift towards cybersecurity. Especially if you've bagged a new laptop, PC or smartphone and know that you'll need a new antivirus plan to deter hackers and scammers.

Fortunately, this time of year is ideal for sorting your antivirus software needs, as the great and good of the online security scene come along with some superb savings and discounts.

Bitdefender, Norton and Kaspersky have got the #1, #2 and #3 slots nailed down in our definitive guide to the best antivirus and all three online security firms have slashed prices.

- 70% off all antivirus from Bitdefender

- Prices from less than $10 at Kaspersky with code CYBER20

Bitdefender Total Security | 1 Year | Up to 5 devices | $27 | 70% off
Total Security takes Bitdefender's virtuoso virus protecting prowess and makes it available for Mac, Android & iOS. This plan covers five devices with the one sub to protect home computing and mobile - so this is definitely the best value for your money.
View Deal

Bitdefender Internet Security | 1 year | Up to 3 PCs | $79.99 $24 | 70% off
For just a few dollars more, Bitdefender's Internet Security adds features like parental control and privacy firewalls. It can protect up to three PCs, making it great value for families or multiple account users.
View Deal

Norton Antivirus Plus |1 Year | 1 PC | $19.99 | 40% off
For under $20 a year you can ensure your brand new tech doesn't get hacked by a nasty dose of malware. Not only does Norton boast some of the best antiphishing technology, but it also has distinguished detection of known threats and intelligent monitoring.
View Deal

Norton 360 Deluxe | 1 Year | Up to 5 devices | $24.99 | 80% off
Skip Norton's 360 Standard package - going Deluxe costs exactly the same thanks to this 80% discount. If youâ€™ve got multiple machines, this is a fab package. Thereâ€™s a number of welcome bonuses including a secure VPN, and parental controls.
View Deal

Kaspersky Internet Security | 1 year | 1 PC | $9.59 with code CYBER20
Just want basic protection for a single Windows PC at the lowest price? Thanks to the glories of Cyber Monday, Kaspersky's CYBER20 code takes its Internet Security package down to below the $10-mark!
View Deal

Kaspersky Anti-Virus | 1 year | Up to 3 PCs | $23.99 with code CYBER20 for extra 20% off
Kaspersky's basic plan gives you real time protection from new and emerging viruses, spyware, and it defends your device against phishing sites or emails that try to steal your money or your identity.

Kaspersky Total Security | 1 year | Up to 5 devices | $39.99 with code CYBER20
This is the cream of the crop of Kaspersky's antivirus packages. It includes everything from both plans above, along with some extra premium features like a freeÂ VPN with up to 300MB of traffic per day and a password manager.
View Deal

Why do we rank Bitdefender so highly?

There's a multitude of reasons why we rank Bitdefender as the world's best antivirus, all of paramount importance to the user.

The provider really does have all the bases covered when it comes to creating top-notch online security software. Naturally, it has powerful anti-malware and spam detection tools, but it's also incredibly easy to set up and use while having minimal impact on the performance of your devices.

Below we have listed our top five reasons for why we consider this antivirus software to be the best:

TechRadar is scouring every retailer and rounding up all the top deals over the Black Friday period, and we’ve put all the best Black Friday deals and Cyber Monday deals in easy-to-navigate articles to help you find the bargains you’re looking for.